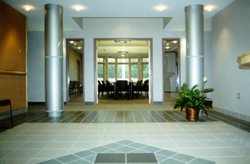 Originally developed as a high performance air delivery system in Europe, Turner Building Science & Design, LLC pioneered the use of this technology in the United States.

Displacement Ventilation utilizes low velocity diffusers located at or near the floor to introduce slightly cooled and dehumidified air. This air, because of its greater density, spreads across the floor. Heat generating objects such as people and computers warm the air causing the fresh ventilation air to rise around the object up to the ceiling where it is then removed from the space. The result is a system that utilizes less energy and provides a higher level of indoor air quality.

Through research and experimentation, TBS developed proprietary engineering guidelines and design procedures in order to successfully implement our Advantage Displacement Ventilation™. Since 1994, Turner Building Science & Design, LLC has successfully designed the installation of displacement ventilation in more than 28 schools.

No Drafts. Air is typically supplied near the floor in the space at extremely low velocity, which results in no "throw" of air and subsequently little risk of "drafts".

Stratified Room Air. Supply air is purposely not uniformly mixed throughout the space. It is intentionally stratified vertically to provide a better quality of air in the occupied part of the facility. Supply air is delivered during occupancy at temperatures slightly lower than desired area temperature. The supply air moves horizontally across the floor until it naturally rises, driven by convective currents as it warms due to internal heat from the process, people, lights, computers, etc.

In addition to the stratification of Carbon Dioxide, from the concentration decay rate, it can be seen that there is rapid flushing of the room as the students leave, confirming the achievement of displacement air movement. This room achieved superior flushing of room generated contaminants with an overall room ventilation rate of only 1.5 air changes per hour. This is less than half the ventilation rate that would be needed with a conventional mixing design, drastically lowering electrical energy use through reduced fan horsepower consumption due to less air movement.

Improved Effective Ventilation. Because of both people and process convective currents, in a high density or industrial application, there is a general upward flow of effluents above the occupied zone, as long as it is not greatly disturbed by fan forced air streams (as happens in conventional mixing distribution systems). Air rises from the lower level of the room around stationary processes due to the development of convective currents over power consuming machinery. This means that occupants located in the lower levels of a room will breathe air closer to supply air conditions, rather than the air being exhausted from the space at the ceiling level, improving ventilation effectiveness. 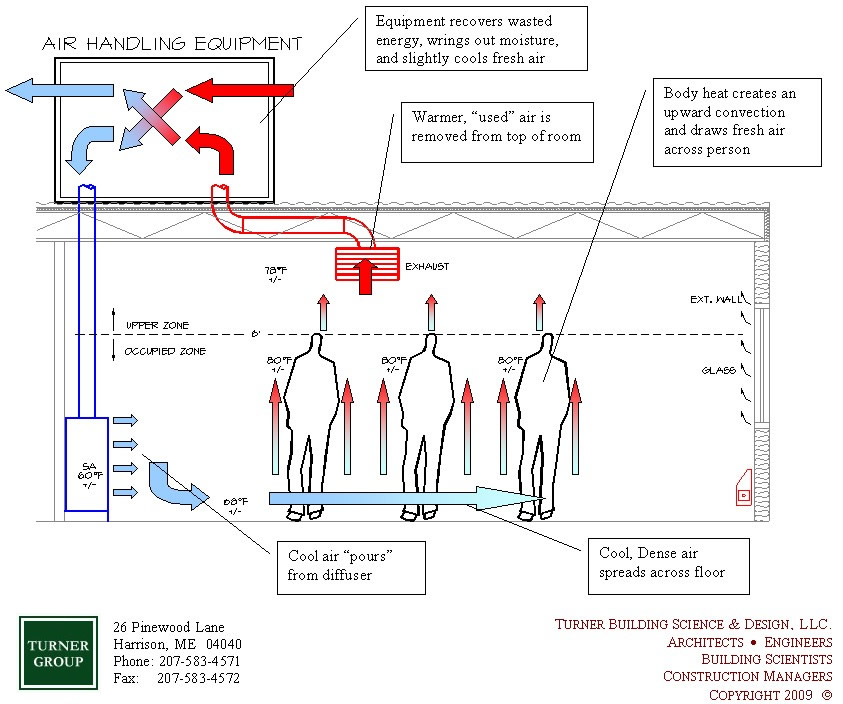